As Trump Closes the Door on Refugees, Uganda Welcomes Them

ARUA, Uganda — President Trump is vowing to send the military to stop migrants trudging from Central America. Europe’s leaders are paying African nations to block migrants from crossing the Mediterranean — and detaining the ones who make it in filthy, overcrowded camps.

But Solomon Osakan has a very different approach in this era of rising xenophobia. From his uncluttered desk in northwest Uganda, he manages one of the largest concentrations of refugees anywhere in the world: more than 400,000 people scattered across his rural district.

He explained what he does with them: Refugees are allotted some land — enough to build a little house, do a little farming and “be self-sufficient,” said Mr. Osakan, a Ugandan civil servant. Here, he added, the refugees live in settlements, not camps — with no barbed wire, and no guards in sight.

“You are free, and you can come and go as you want,” Mr. Osakan added.

As many nations are securing their borders and turning refugees away, Uganda keeps welcoming them. And they keep coming, fleeing catastrophes from across this part of Africa.

In all, Uganda has as many as 1.25 million refugees on its soil, perhaps more, making it one of the most welcoming countries in the world, according to the United Nations.

And while Uganda’s government has made hosting refugees a core national policy, it works only because of the willingness of rural Ugandans to accept an influx of foreigners on their land and shoulder a big part of the burden.

Uganda is not doing this without help. About $200 million in humanitarian aid to the country this year will largely pay to feed and care for the refugees. But they need places to live and small plots to farm, so villages across the nation’s north have agreed to carve up their communally owned land and share it with the refugees, often for many years at a time.

“Our population was very few and our community agreed to loan the land,” said Charles Azamuke, 27, of his village’s decision in 2016 to accept refugees from South Sudan, which has been torn apart by civil war. “We are happy to have these people. We call them our brothers.”

United Nations officials have pointed to Uganda for its “open border” policy. While the United States, a much more populous nation, has admitted more than three million refugees since 1975, the American government settles them in the country after they have first been thoroughly screened overseas.

By contrast, Uganda has essentially opened its borders to refugees, rarely turning anyone away.

Some older Ugandans explain that they, too, had been refugees once, forced from their homes during dictatorship and war. And because the government ensures that spending on refugees benefits Ugandans as well, younger residents spoke of how refugees offered them some unexpected opportunities.

“I was a farmer. I used to dig,” Mr. Azamuke said. But after learning Arabic from refugees from South Sudan, he got a better job — as a translator at a new health clinic that serves the newcomers.

His town, Ofua, is bisected by a dirt road, with the Ugandans living on the uphill side and the South Sudanese on the downhill side. The grass-thatched homes of the Ugandans look a bit larger and sturdier, but not much.

As the sun began to set one recent afternoon, a group of men on the Ugandan side began to pass around a large plastic bottle of waragi, a home brew. On the South Sudanese side, the men were sober, gathered around a card game.

On both sides, the men had nothing but tolerant words for one another. “Actually, we don’t have any problems with these people,” said Martin Okuonzi, a Ugandan farmer cleaning his fingernails with a razor blade.

As the men lounged, the women and girls were still at work, preparing dinner, tending children, fetching water and gathering firewood. They explained that disputes did arise, especially as the two groups competed for limited resources like firewood.

“We’ve been chased away,” said Agnes Ajonye, a 27-year-old refugee from South Sudan. “They say we are destroying their forests.”

And disputes broke out at the well, where Ugandan women insist they should be allowed to skip ahead of refugees.

“If we hadn’t given you the land you live on, wouldn’t you be dying in Sudan?” said Adili Chandia, a 62-year-old refugee, recounting the lecture she and others got from a frustrated Ugandan woman waiting in line.

Ugandan officials often talk about the spirit of Pan-Africanism that motivates their approach to refugees. President Yoweri Museveni, an autocratic leader who has been in power for 32 years, says Uganda’s generosity can be traced to the precolonial days of warring kingdoms and succession disputes, when losing factions often fled to a new land

This history of flight and resettlement is embedded in some of the names of local groups around western Uganda, like Batagwenda, which means “the ones that could not continue traveling.”

The government encourages the nation to go along with its policy by directing that 30 percent of foreign aid destined for refugees be spent in ways that benefit Ugandans nearby. So when money for refugees results in new schools, clinics and wells, Ugandans are more likely to welcome than resent them.

For Mr. Museveni, hosting refugees has given him relevance and political capital abroad at a time when he would otherwise have little.

A former guerrilla fighter who quickly stabilized much of his country, Mr. Museveni was once hailed as an example of new African leadership. He was relatively quick to confront the AIDS epidemic, and he invited back Ugandans of Indian and Pakistani descent who had been expelled during the brutal reign of Idi Amin in the 1970s.

But his star has fallen considerably. He has clung to power for decades. His security forces have beaten political opponents. Freedom of assembly and expression are severely curtailed. 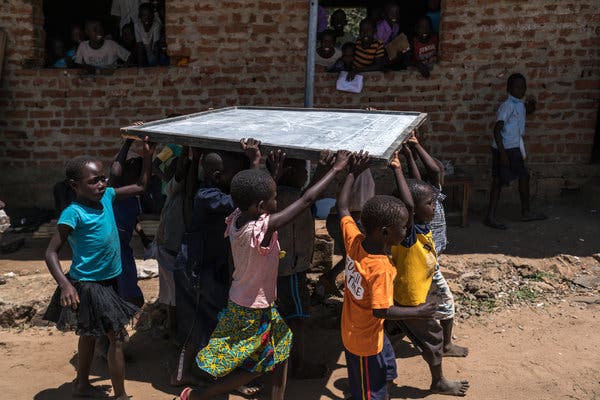 Even so, Uganda’s openness toward refugees makes Mr. Museveni important to European nations, which are uneasy at the prospect of more than a million refugees heading for Europe.

Other African nations also host a significant number of refugees, but recent polls show that Ugandans are more likely than their neighbors in Kenya or Tanzania to support land assistance or the right to work for refugees.

Part of the reason is that Ugandans have fled their homes as well, first during the murderous reign of Mr. Amin, then during the period of retribution after his overthrow, and again during the 1990s and 2000s, when Joseph Kony, the guerrilla leader who terrorized northern Uganda, left a trail of kidnapped children and mutilated victims.

Many Ugandans found refuge in what is today South Sudan. Mark Idraku, 57, was a teenager when he fled with his mother to the area. They received two acres of farmland, which helped support them until they returned home six years later.

“When we were in exile in Sudan, they also helped us,” Mr. Idraku said. “Nobody ever asked for a single coin.”

Mr. Idraku has since returned the favor, loaning three acres to a South Sudanese refugee named Queen Chandia, 37. Ms. Chandia said the land — along with additional plots other Ugandans allow her to farm — has made all the difference.

Her homestead of thatched-roof huts teemed with children tending their chores, grinding nuts into paste and maize into meal. Ms. Chandia is the mother of a girl and two boys. But over the years, as violence hollowed out her home country, Ms. Chandia started taking in the orphaned children of relatives and friends. Now 22 children call her “mom.”

A refugee for nearly her entire life, Ms. Chandia arrived in Uganda as a young girl nearly 30 years ago. For years, she worried about being expelled.

“Maybe these Ugandans will change their minds on us,” she said, describing the thought that plagued her. Then one day the worry stopped.

But Mr. Osakan, the administrator who oversees refugee affairs in the country’s extreme northwest, is anxious. There is an Ebola outbreak over the border in the Democratic Republic of Congo. Mr. Osakan fears what might happen if — or when — a refugee turns up in Uganda with the dreaded illness.

“It would destroy all the harmony between refugees and host communities,” he said, explaining that it would probably lead to calls to seal the border.

For now, the border is very much open, although the number of refugees arriving has fallen significantly. In one of the newer settlements, many of the refugees came last year, fleeing an attack in a South Sudanese city. But some complained about receiving too little land, about a quarter acre per family, which is less than previous refugees had received.

“Even if you have skills — in carpentry — you are not given a chance,” said one refugee, Simon Ludoru. He looked over his shoulder, to where a construction crew was building a nursery school. The schoolhouse would teach both local Ugandan and South Sudanese children together, but the workers were almost entirely Ugandan, he said.

At the construction site, the general contractor, Sam Omongo, 50, said he had hired refugees for the job. “Oh, yes,” he exclaimed.

“Not a lot, actually,” he acknowledged. “I have about three.” Mr. Omongo called one over.

“Are you a refugee?” Mr. Omongo asked the slight man.

“No, I’m from Uganda,” he said softly. His name was Amos Chandiga, 28. He lived nearby and owned six acres of land, though he worked only four of them. He had lent the other two to a pair of refugees.

“They asked me, and I gave it to them,” Mr. Chandiga explained. He patted his chest. “It comes from here, in my heart.”