Watch Greta Thunberg hit back at Trump on climate change

President Trump made his address at Davos and was quickly countered by activist Greta Thunberg in a speech of her own.
Source: CNN Business

Harry and Meghan in Canada: Couple warn media over photos

(CNN)Prince Harry’s plans for a “more peaceful life” away from the royal spotlight have already been cast into doubt as he joined his wife, Meghan, and son, Archie, in Canada on Tuesday amid a fresh paparazzi feud.

The publication of photographs showing the Duchess of Sussex hiking with baby Archie and their dogs in Canadian woodland prompted a warning to the media from the couple’s lawyers against running images without consent, a royal source has confirmed.
The images were used in a number of media outlets, including on the front page of British tabloid newspaper the Sun.
Harry has had an uneasy relationship with the press since his childhood; brought up under the glare of publicity, the young prince saw his mother, Princess Diana, struggle with the paparazzi. Diana died after a high speed chase of her car through Paris by photographers.
Last year, Harry accepted “substantial damages” and an apology from a picture agency that used a helicopter to take photos of the home he shared with Meghan, forcing the couple to move out.
The latest scuffle comes just days after the couple finalized the terms of their split from official British royal family duties, a move intended to allow them a life further from the public eye.
A royal spokesperson told CNN they would not comment on the family’s private schedule.

Photos in UK media showed Harry walking off a plane early Tuesday on Vancouver Island, where the family spent time over Christmas holidays with the Duchess’ mother, Doria Ragland.
Meghan lived in the country for seven years and the couple say they have a “strong connection to Canada.”
The Sussexes are set to embark on a proposed new life in the country, and Prime Minister Justin Trudeau said last week that discussions are ongoing in over who will pay the costs of their security detail.
The prince’s departure from the UK follows a turbulent period in which Harry and Meghan agreed to give up their royal titles and end their official duties.
The couple made the shock announcement that they were stepping back from senior royal duties on Instagram on January 8, and the Queen announced a transition period had been agreed Saturday.
Conversations with the pair had been going on for months, said the monarch in a statement.
“I am pleased that together we have found a constructive and supportive way forward for my grandson and his family,” read the statement.
Under the terms of the deal, Harry and Meghan will no longer represent the Queen as working royals, splitting their time between the UK and North America as they work toward becoming financially independent. 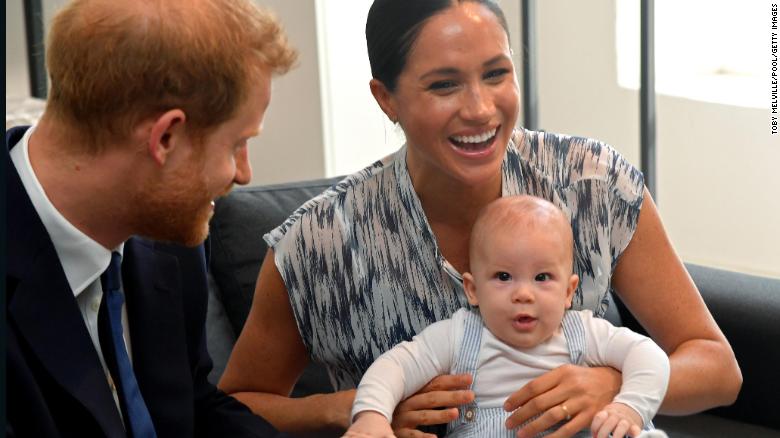 Harry, Meghan and baby Archie are expected to split their time between the UK and North America.

The pair will no longer use their royal titles — His and Her Royal Highness — beginning this spring, and Buckingham Palace announced Saturday they would instead be addressed as “Harry, Duke of Sussex” and “Meghan, Duchess of Sussex.”
It’s a move the Queen hadn’t been expected to make and it’s entirely unprecedented for a monarch to ask her own grandchild to drop their title, but given the prospect of the Sussexes signing commercial deals in the future, the need to separate their ventures from the royal household was pressing.
However, in one of the first hiccups in the process of decoupling Harry and Meghan from the royal family, the palace later said it would revise its guidance after reports Meghan’s new title made it sound as though she were divorced.
The problem is that the same formatting was adopted by Sarah Ferguson — now addressed as “Sarah, Duchess of York” — after she divorced Prince Andrew in 1996. And Harry’s mother was known as Diana, Princess of Wales after her divorce from Prince Charles.

On Sunday, Harry expressed “great sadness” about the developments at a charity event in London.
“Our hope was to continue serving the Queen, the commonwealth, and my military associations, but without public funding,” he said in a speech. “Unfortunately, that wasn’t possible.”
Harry emphasized that the decision “is not one I made lightly” during his speech.
“The UK is my home and a place that I love,” Harry said. “That will never change.”
“It was so many months of talks after so many years of challenges. And I know I haven’t always gotten it right, but as far as this goes, there really was no other option.”

CNN’s Max Foster and Rob Picheta contributed to this report.

Game of Thrones cast says farewell on this week’s EW cover: ‘I will miss this so much’

The cast of Game of Thrones says farewell to the HBO blockbuster in Entertainment Weekly‘s new issue going behind the scenes of the final season’s end game.

The issue dives deep into the tragic downfall of Daenerys Targaryen with Emilia Clarke and Kit Harington, along with chats with Isaac Hempstead Wright about playing the new king of Westeros and Sophie Turner on becoming the Queen in the North. There are also 14 new photos from behind the scenes and the show itself.

“I will miss this so much,” says GoT star Peter Dinklage. “But it’s time to move on. A lot of shows stay on television for too long. You got to make room for the new thing. And no decision should ever be made just because something is making a lot of money. [Showrunners David Benioff and Dan Weiss] are smart enough, and HBO is smart enough, to not just go, ‘Well, everybody’s getting rich let’s keep going’ — that’s the worst thing you can do with something creative like this. I know it’s difficult to make that decision. This is the greatest role I’ve ever had.”

The younger cast members are ready to move on too, especially after spending most of their lives playing just one role. Like Jon Snow going beyond The Wall to start a new life with the Wildlings, Harington is ready for something new.

“The goal of acting is to gain some recognition and fame — that’s not what I’m looking for anymore,” Harington says. “This gives me the freedom to try things I want to do. I keep nicking beers from David and Dan’s fridge. I left them a note saying, ‘I owe you two beers and one career,’ and that’s how I feel.”

“This show is my life,” Clarke says. “Any doors that are open now, this show opened them. Any major life choice I’ve made have been a reaction to this show.”

MUSIC: Why Kent and Flosso’s ‘Byafayo’ is the jam that will make your traffic woes disappear

One cannot help simply singing along tothis new love anthem from one of the most talented, hard- working and underrated musical duos, Voltage music.

Kent and Flosso sing their souls out to this one girl with whom they promise to write down history in the books of love.

They craft their story carefully, with well thought out lyrics as they sequen- tially narrate their journey, from how they met the girl downtown in a red dress and this, is arguably one of Voltage’s most outstanding efforts.

The production is smooth. A consistent bass tempo fused with subtle piano keys that spells out a love ballad from the word go. The chorus has an infusion of afro beat and RnB that sets pace for the duos effortless delivery.

The song has very rich lyrical prowess. Kent in the opening verse becomes a story teller, narrating how he met this dream girl, downtown, in a red dress as they waited for a train.

The lyrics have rhyme, they tend towards poetry and they paint a very vivid picture and one cannot simply wait for what the video will look like.

In another verse, Flosso alludes to the once popular Televisionseries couple of “Angelo and Ina” as he refers to how great theirlove will be. The lyrical connection is deep.

Kent’s vocal prowess is breathtaking. Ever since the duo’s rstsong, he has taken tremendous strides as far as his vocal deliv- ery and he sure does justice to this song.

On this song, Voltage music not only make love history but also write down musical history as one of the most talented duos we have seen in the industry. Tremendous effort.Very beautiful song.

With jackets, hats, boas and shirts soaked with sweat, Belgian rapper, MC and hip hop artist, Baloji performs after returning to native Congo, a country that haunts his musical universe.

The MC has to prove himself to young people from Kinshasa, who came mainly for an urban music festival featuring local rappers.

The crowds go wild as he performs with guitarist Dizzy Mandjeku, a living legend of Congolese rumba that connects the rapper to Papa Wemba’s legacy.

The day after the concert, the artist runs behind the camera on the busy Boulevard “24”, for the shooting of the song “Spitting fire, fetishes and fanfare”. The recording is full of energy inventiveness, just like its natural setting and its director

Baloji, meaning “sorcerer” in Swahili, was thrown on the roads of exile in Belgium. Born out of wedlock and separated from his mother by his father, he heals the wounds of the past with music. He speaks how it has enabled his success abroad.

The artist addresses the troubles of his childhood on albums Impala Hotel and 137 Boulevard.

I failed, I was not the best- Jose Chameleone splits from wife Daniella

Ugandan singer Jose Chameleone has announced that his nine-year marriage with wife Daniella Atim is over.

Chameleone made the announcement via social media where he disclosed that he was heartbroken but had made his choice.

In the posts, the veteran superstar revealed that he was now a single man, not searching for love and will be the “last man standing.”

“Everything has an End! I failed, I was not the best I could be! What else do we need, God had blessed us, loved us, he will always be there for us:  Stupid people will think it’s a promotional craft.

“And put their stupid opinion. But for us who know what we are going through, enough is enough!! We need to live beyond our egos!!

“I am single and not searching!! I will be the last man standing D’ I let you be Be Daniella.
God bless you always.

“I can’t prove myself more than I have only losers will prove you have been everything but enough is enough I wish you the best. Heartbroken but have to make a decision finally. When the going gets tuff the tuff gets going,” he posted.

In 2017, Daniella, filed for divorce accusing her husband of cruelty, saying he would beat and humiliate her even in the presence of their five children.

In court records seen by Ugandan local media, she claimed that the singer resorted to binge drinking that culminated into him beating her and forcing her to seek refuge at her friends’ homes.

“On or about 2013, the respondent (Chameleone) started molesting the petitioner (Daniella) with no reasonable cause and the acts of the molestation have continued to date,” Daniella said in her divorce suit before Nakawa Court.

A position disputed by the singer who through a Facebook live stream said that there would be no divorce and that he loved his wife very much.