Horrors of War: risk rape to feed your family, or starve

Juba, South Sudan — On a dirt path dotted with bright-red bougainvillea, women in ankle-length dresses gather in groups of five or more before venturing into the forest.
Right outside the largest refugee camp in Juba, South Sudan’s capital, sickles readied in their hands to cut firewood, the women say banding together offers a tiny sense of security, a little protection and the reassurance that if something happens to them inside the forest one of them might escape to tell someone.
In four or five hours, they’ll be back at the camp, one of them says.
“If God is willing,” another adds.
In the five years of South Sudan’s civil war, 1.9 million have fled to camps within the country, where the UN provides physical protection as well as food rations amidst an ongoing famine. 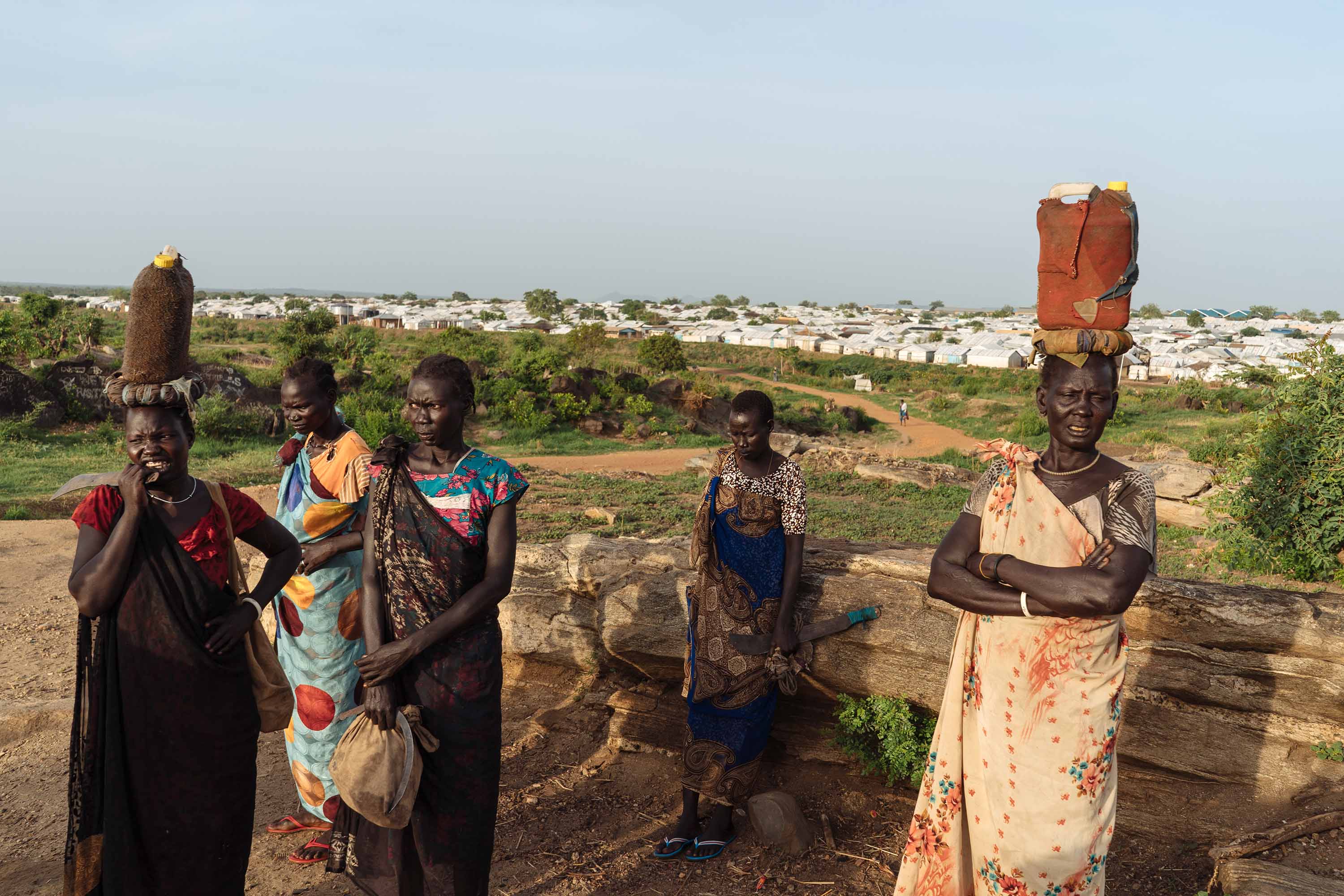 South Sudanese women wait for others to join on the way to the forest to get firewood.
To cook the food rations, firewood must be collected — a task that falls to the women.
“If you’re in the forest to collect firewood and the soldiers see you, they will rape you,” Nykeer Mut, the women’s leader of one of the camp’s zones, said.
“But what are we supposed to do?”
The women know of the dangers, she said. They’ve heard of those who, far from the protection of the camp’s razor wire and UN soldiers, were raped, tortured and kidnapped. Or they have experienced it themselves.
Based on interviews, the UN estimates that 70% of women living in camps have been raped. Since the beginning of the conflict in 2013, South Sudanese army soldiers have been accused of using rape and other forms of sexual violence as a tactic of war, aimed at systematically traumatizing and humiliating entire ethnic groups. Outside the refugee camp, when the women get to the forest, soldiers are often already waiting for them, hiding behind tall grass and tree trunks, Mut said.
The day soldiers raped Mut, she recounted that the grass was high and everyone in her group was focused on the task at hand, hoping to return to the camp as quickly as possible. Nobody had seen the soldiers coming, she said. 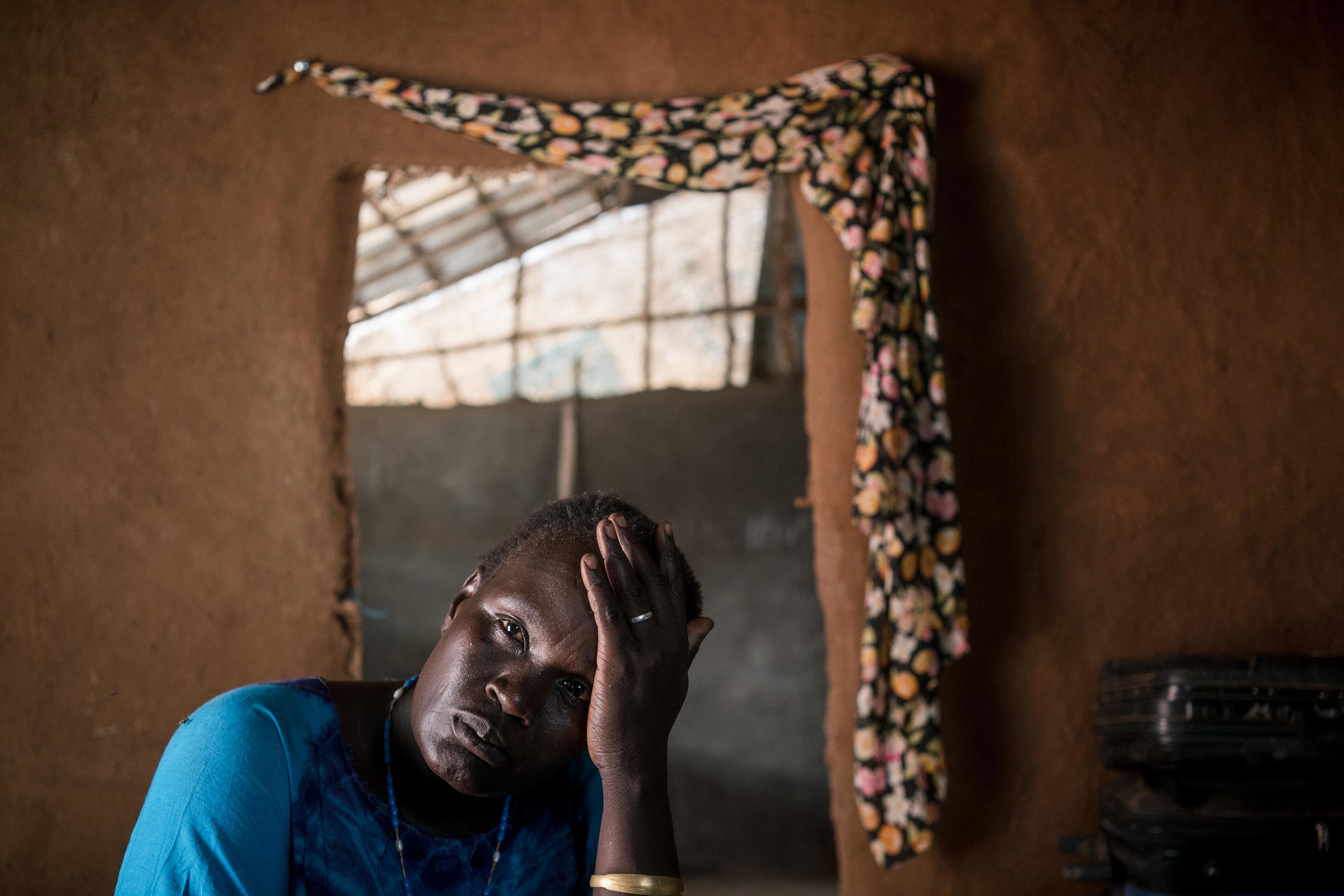 Nykeer Mut, a women’s leader of one of the camp’s zones, says she was raped on her way to get firewood.
When the soldiers jumped out of the grass, the women screamed to alert others. They ran for their lives, but the grown soldiers’ steps easily outpaced those of Mut’s 10-year-old daughter, who had come to the forest to help. The soldiers grabbed the girl. Mut turned around. “I couldn’t leave my daughter,” she said.
As they tied Mut’s hands behind her back, they talked about how young the girl looked, Mut said.
“They said: ‘Let’s just rape the mother.'”
One soldier pushed Mut to the ground. Two others pinned down the girl, forcing her to watch.
The government has not replied to requests for comment, but a government spokesman told Al Jazeera last September that soldiers who rape are punished. The same spokesman also questioned survivors’ claims. 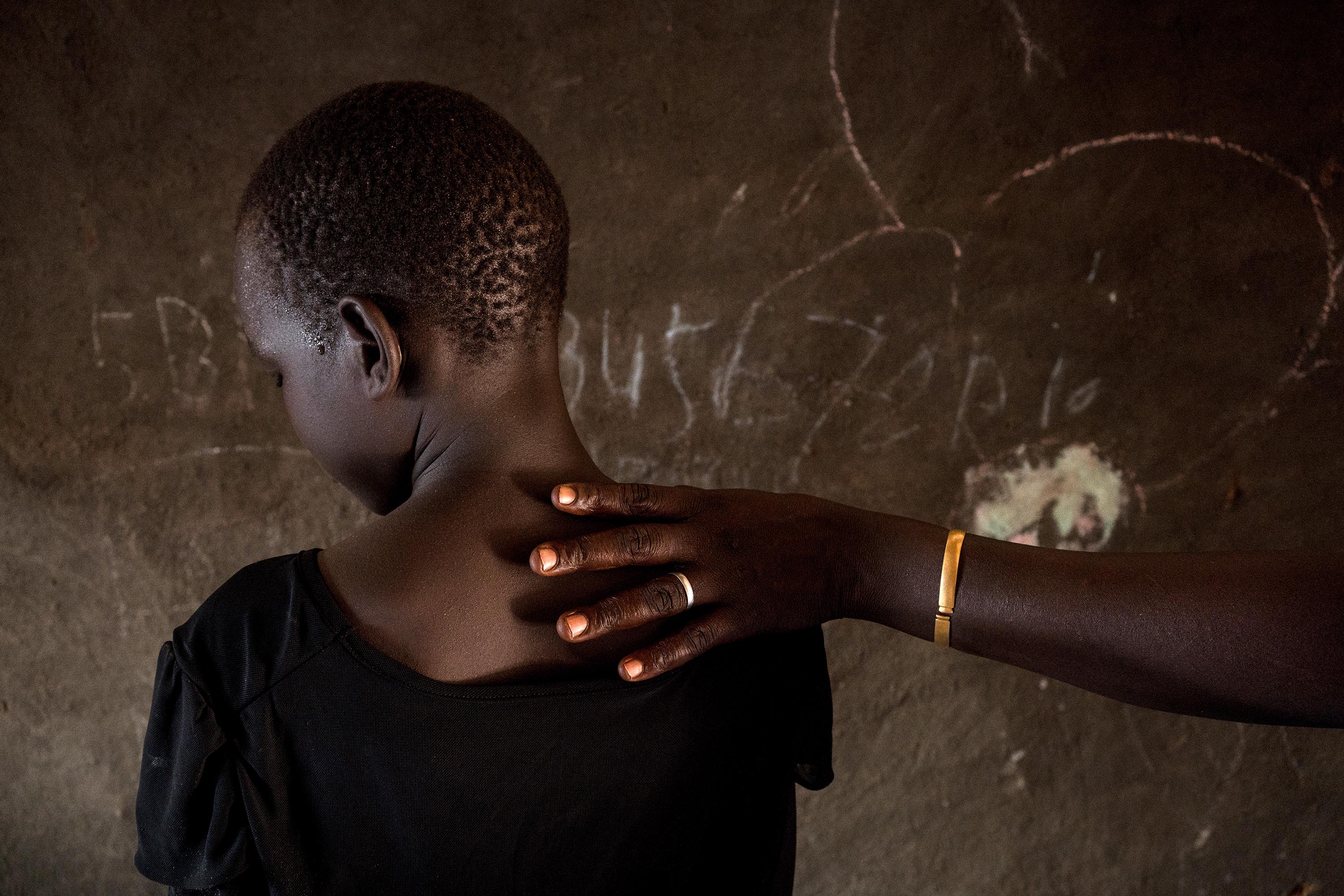 Mut’s daughter, who witnessed the rape, photographed in their home at the camp.
Four other residents of the camp said that they too had been attacked in the forest, and several more said that rape and assault are common.
Christine Ayoo, the head of an International Rescue Committee center where rape cases are recorded at the camp, says that such attacks happen every day.
“It’s not just rape, we even have kidnappings and killings,” she said.
A few months ago, a search party was looking for a small group of women who had disappeared in the forest. They found remains hanging from ropes on a tree — six in total. The number didn’t match the missing group, suggesting that they had found another group. “But we couldn’t identify them anymore,” Ayoo said. 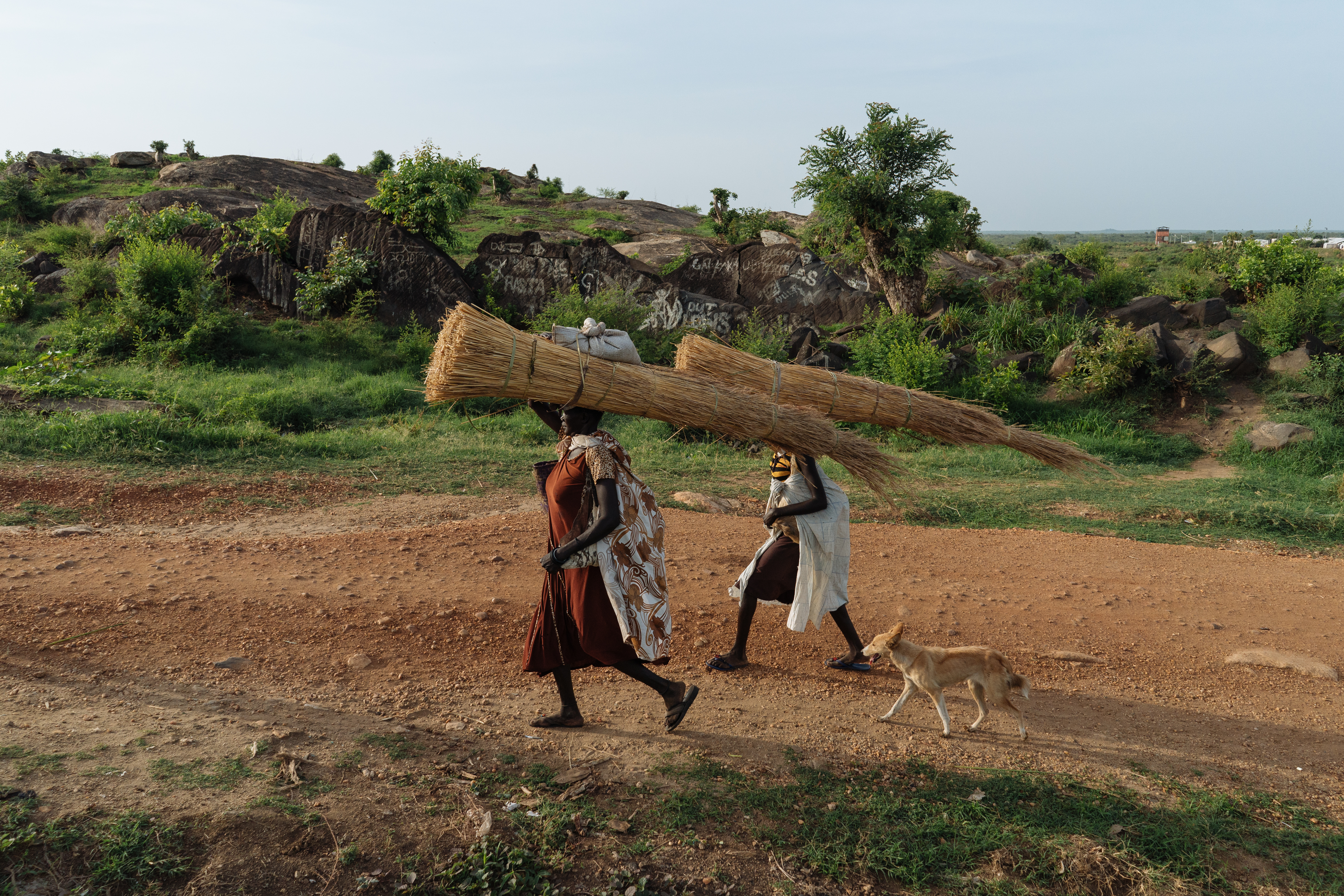 Women return home to the camp after collecting firewood.
The solution, Mut, Ayoo and others suggest, could be simple: If each family was provided charcoal or firewood, nobody would have to venture outside anymore.
South Sudan’s civilians face many dire challenges. An ongoing famine is currently threatening the lives of some 5.7 million people, and humanitarian organizations are scrambling to get emergency relief to the starving. This year alone, 20,000 have fled insecurity and hunger to neighboring Ethiopia. A peace deal is currently being discussed, but such agreements have been made in the past, and the hope for real resolution is low.
So far, the UN has received only about one-fifth of the funding it has appealed for.
“We are in a totally resource-poor environment where we are really just trying to save lives,” said Andrea Cullinan, the gender-based violence coordinator for the United Nations Population Fund in South Sudan. 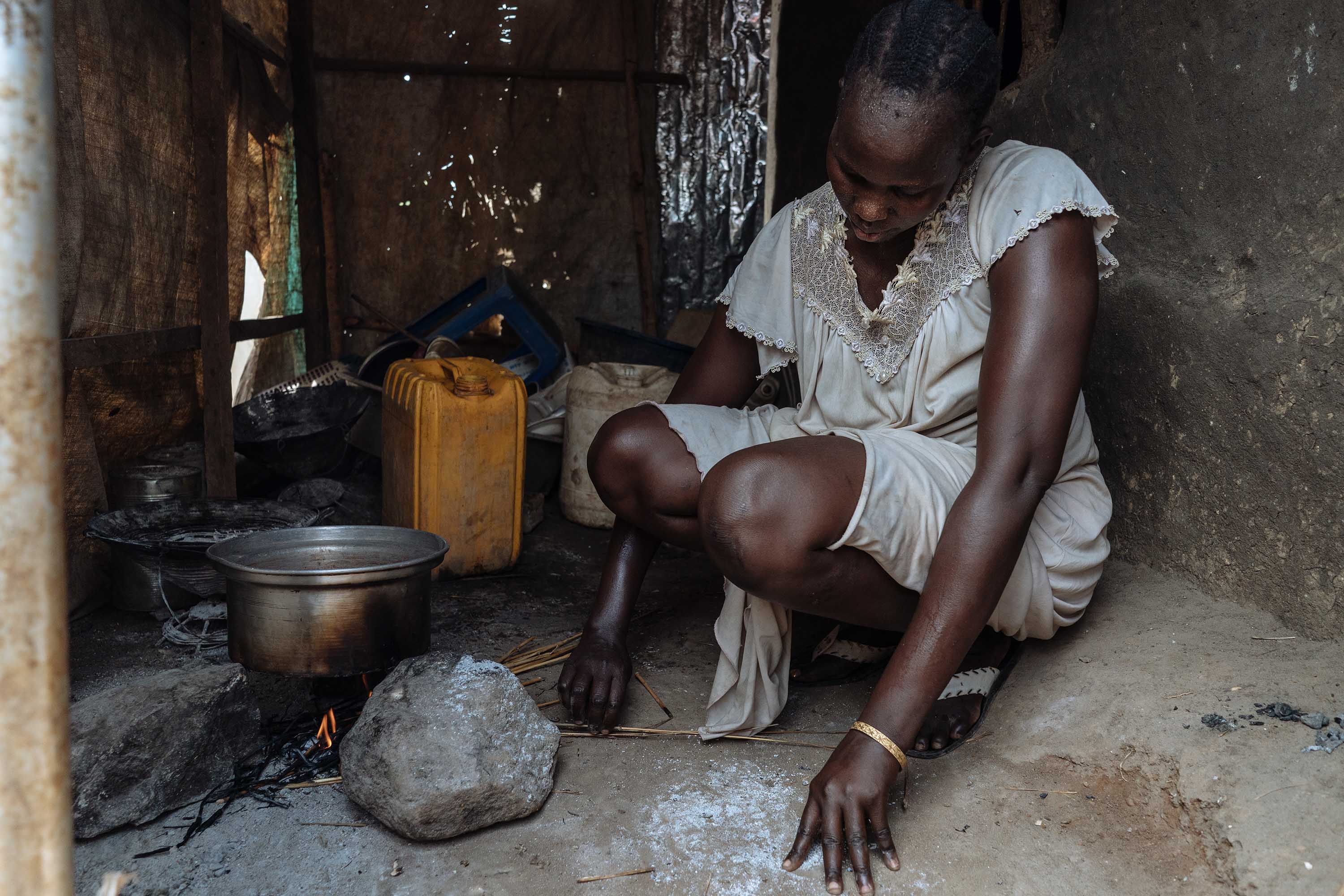 Angeline, a South Sudanese woman, photographed making a fire in her kitchen.
If there was sufficient funding, Cullinan said, NGOs could look into alternatives, such as teaching people how to make briquettes from animal manure or grass. Such initiatives would mitigate risks, however, and not address the root cause of the rape epidemic: Gender inequality.
Civil war, a breakdown of rule of law and impunity for perpetrators has worsened the situation, Cullinan said, “but if it didn’t have patriarchal norms that place traditional expectations on women, then you wouldn’t have gender-based violence.” 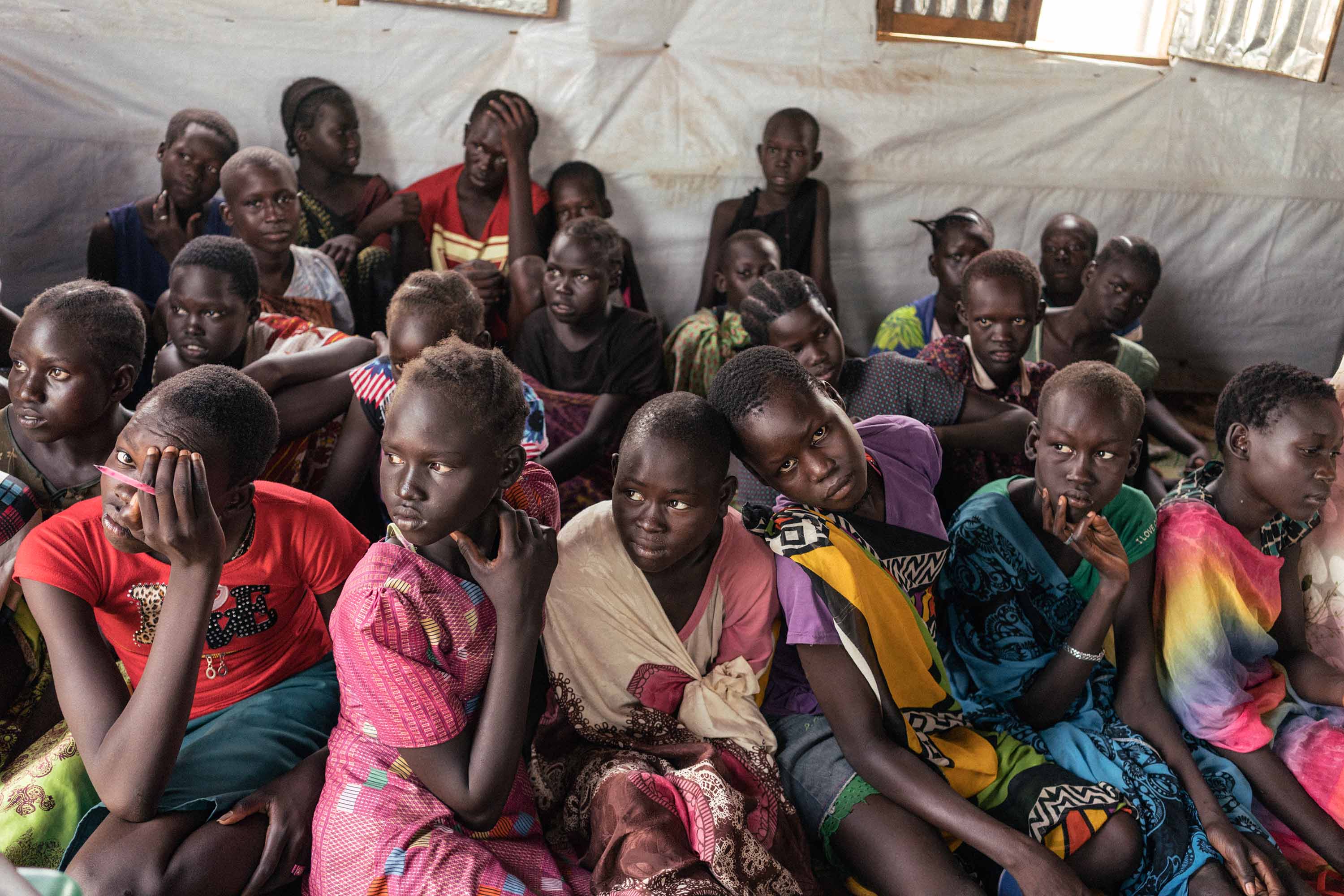 A center for girls inside the camp, where — among other things — they learn what to do if a man tries to rape one of them while collecting firewood.
With South Sudan’s entrenched patriarchy, the chance for girls to obtain an education is harder than anywhere else in the world — so hard, in fact, that they are more likely to have been married as teenagers than to have gone to primary school.
Their role is that of obedient daughters, sisters and wives, their domains restricted to childcare and cooking. That’s also why only women are seen heading into the forest. That men are more likely to be killed than raped plays a role, but even if it were safe, women in South Sudan say societal norms dictate that they fetch firewood. 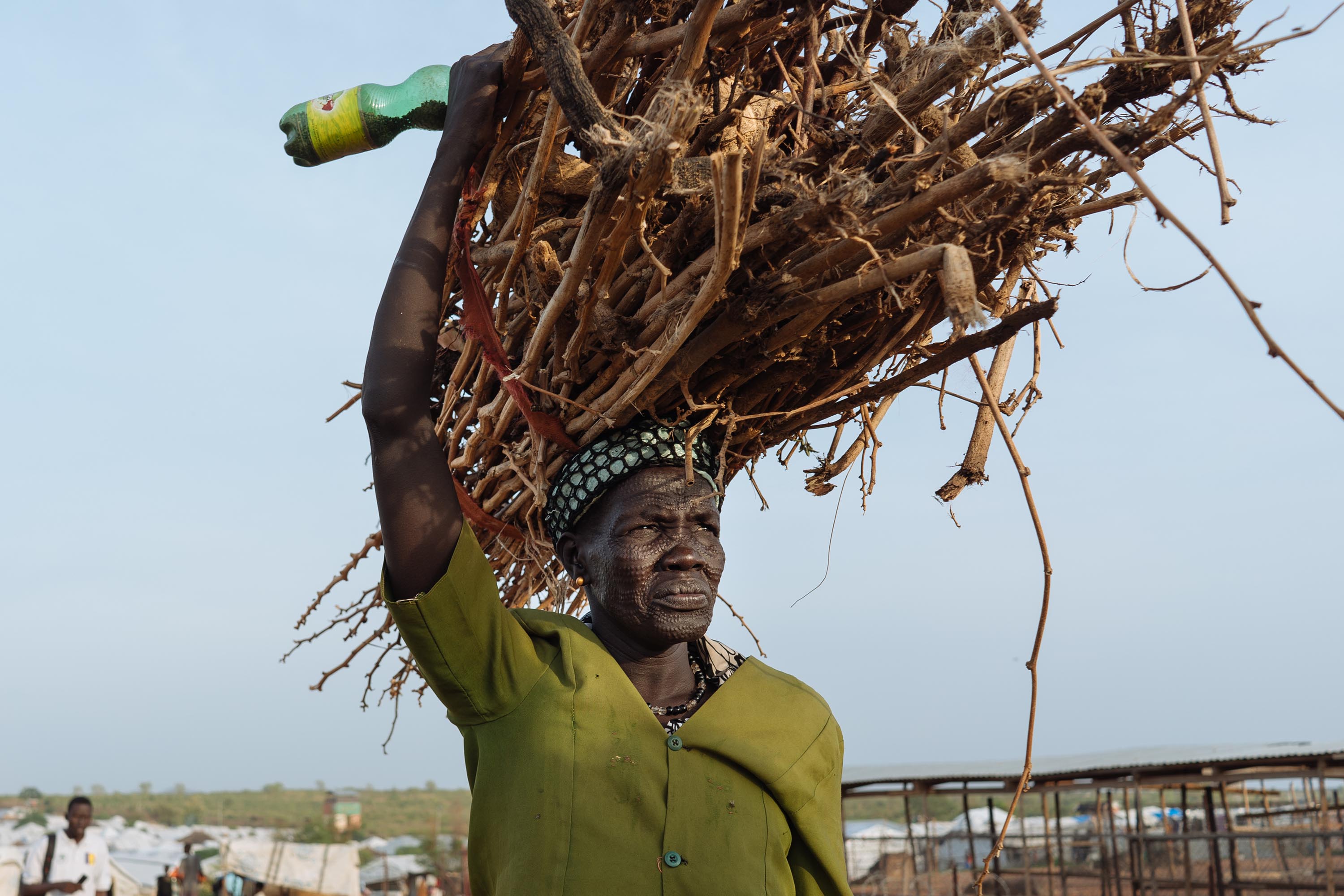 A woman photographed carrying firewood home from the forest.
And the burden to prevent incidents of sexual violence stays with women and girls who are instructed to protect themselves. They’re told: Be careful how you act, mind your environment. And if you can, don’t venture out of the camp.
But none of that had protected Mut, or other women like her.
In the afternoon, the women trickle back into the camp from the forest, balancing bundles of firewood as heavy as 60 kilos on their heads. The physical weight doesn’t bother them — they are used to it, they said, and it doesn’t compare to the psychological burden of having to go into the forest. 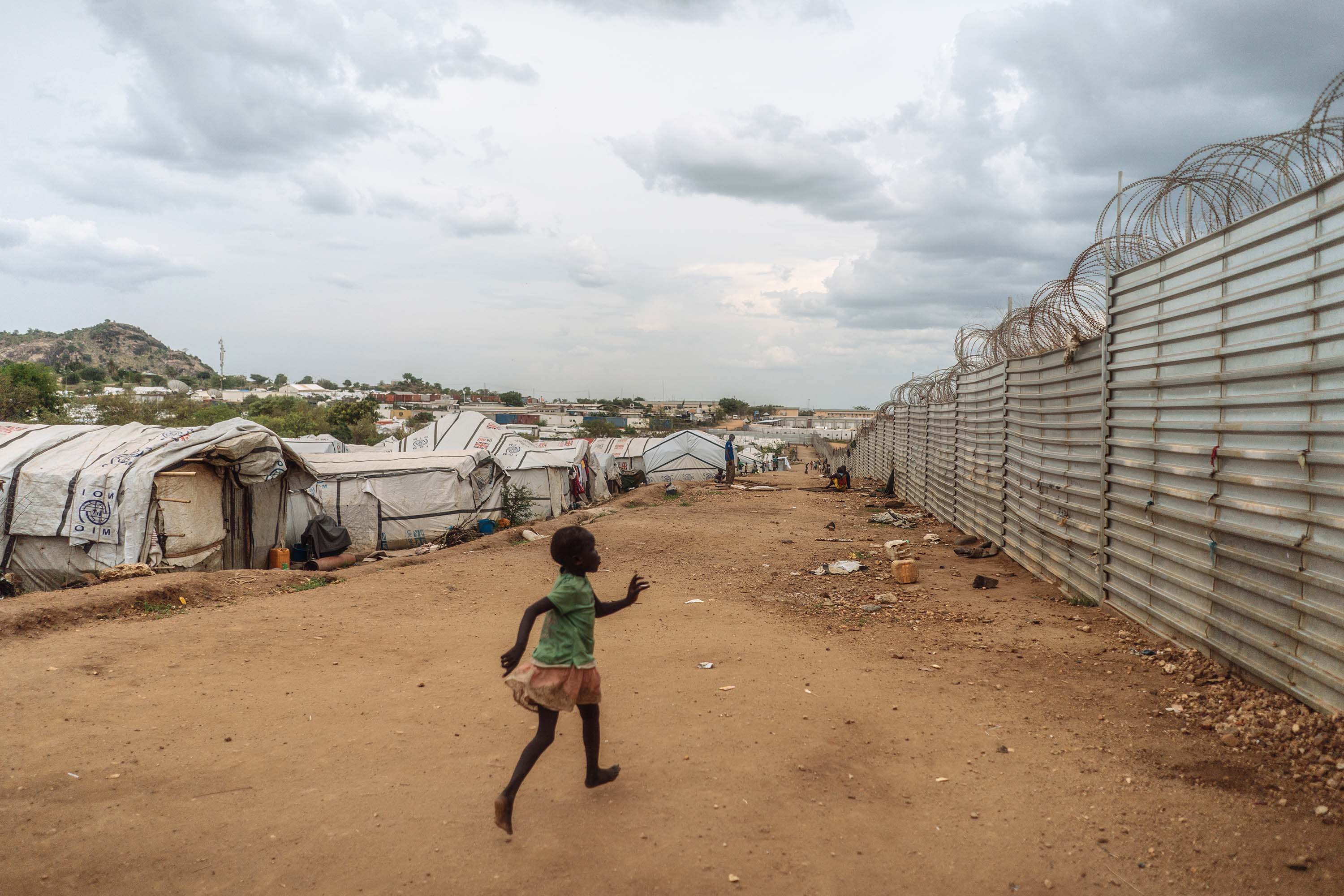 A young girl runs inside the camp, the largest in the capital city.
Mut isn’t among them anymore. She hasn’t returned to the forest since the attack, and is now living off her meager savings, buying firewood off those who are still taking the risk.
What happens when she runs out of money? She stared at the blank wall of her mud house and sat upright, her turquoise rosary swinging from her neck. She only knows that neither her nor her daughters will ever venture into the forest again.
“I’d rather starve,” she said.

Hruby and Reyes Morales were 2018 International Women’s Media Foundation fellows. The As Equals reporting project is funded by the European Journalism Centre via its Innovation in Development Reporting Grant Programme.