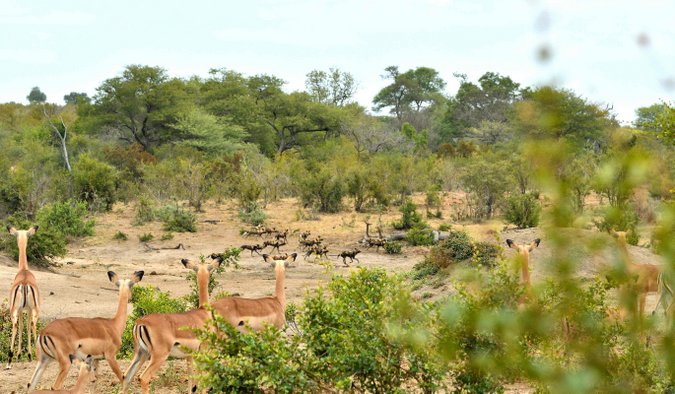 Our Photographer of the Year 2018 has now closed for entries, and we must say that we have received an incredible array of photos! A lot of the photos do more than just show wildlife doing what they do best – they also tell a story.

Rob Keulemans entered a series of photos that showed a pack of wild dogs messing around with other wildlife in the Kruger National Park, South Africa. He now shares with us more photos that he took of the wild dogs. 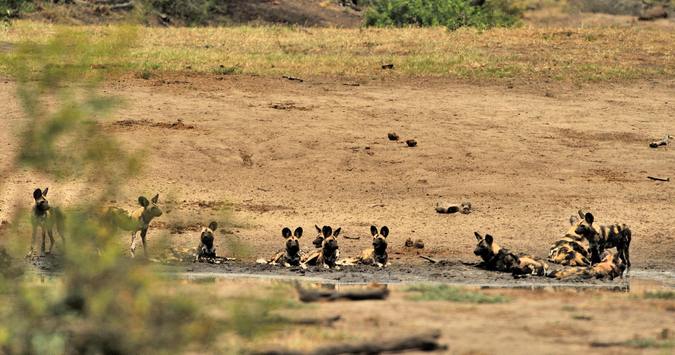 The wild dogs rest in the mud © Rob Keulemans

Written, and photographs, by Rob Keulemans

The 5th of February started off as any normal day in the Kruger… well, of course you can never really speak of a ‘normal’ day in Kruger!

The Ximangwaneni dam, south of Muzandzeni picnic spot, is a favourite spot for us to visit. Although the dam contained less water than we expected this time around (the rainy season had yet to start obviously), we knew that we would be guaranteed some fantastic sighting just waiting to appear.

It was around 8am when we spotted the pack of 13 wild dogs at the far western side of the dam. A bit far away, but we stayed to watch. This was one of the best choices we made as we never expected to witness the show they would give us for the rest of the day! 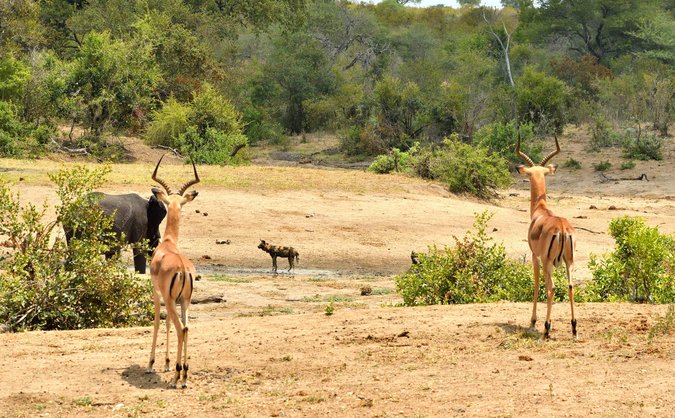 Keeping an eye on the dogs © Rob Keulemans

Soon after we had arrived a herd of impala turned up. We expected to witness a kill as the dogs started running towards them, chasing some impala back into the bushes. We quickly started the car, turned around to tried and follow the dogs who were chasing the impala. We feared that we would loose them, but after some minutes the dogs returned, with a few of them resting in the mud – obviously it was a failed hunt and they needed to cool down. 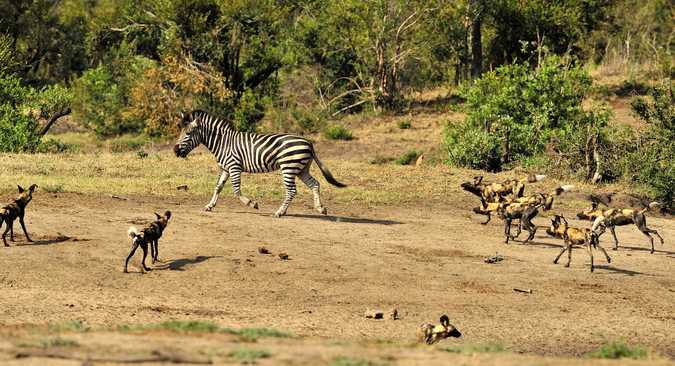 Not so long after that a lonely zebra passed by and a few dogs followed it. At first the zebra ran away, but a few minutes later he realised that he could probably stand up to these pesky young dogs. So he turned the tables around and chased the dogs instead! 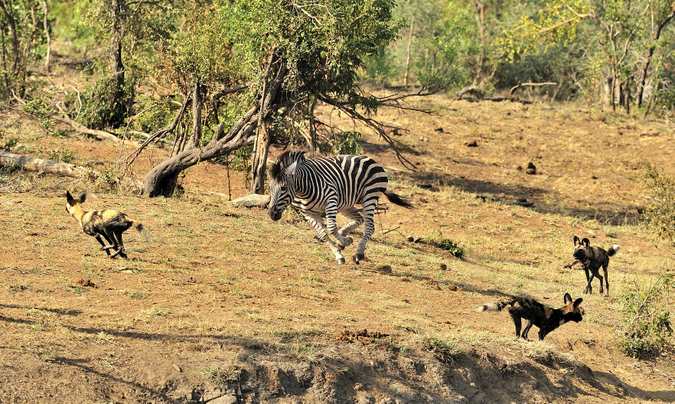 “So what next?” we were asking ourselves.

To our surprise a beautiful male sable antelope appeared – already a treat by itself! When the sable noticed the dogs at the other side of the water, he immediately turned around and started running. 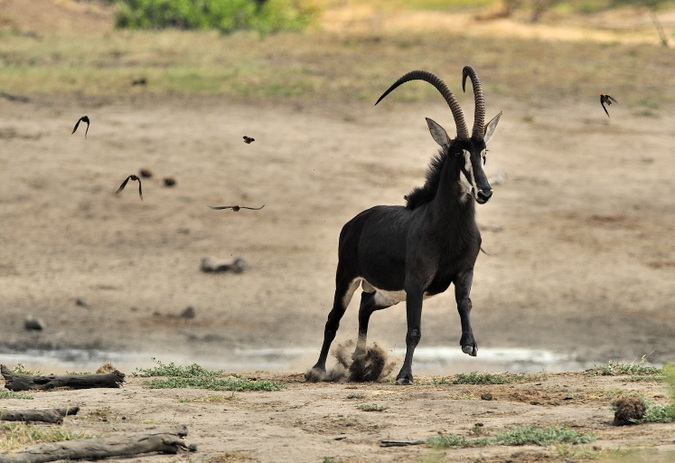 Of course in the meantime we found ourselves not alone anymore as more cars had joined the scene – though they generally stayed for only a short time. Perhaps because it was just ‘dogs’, or that it was a bit far away and not everybody had binoculars?

We, however, definitely planned to stay considering what we had already witnessed – little did we know that the best had yet to come! 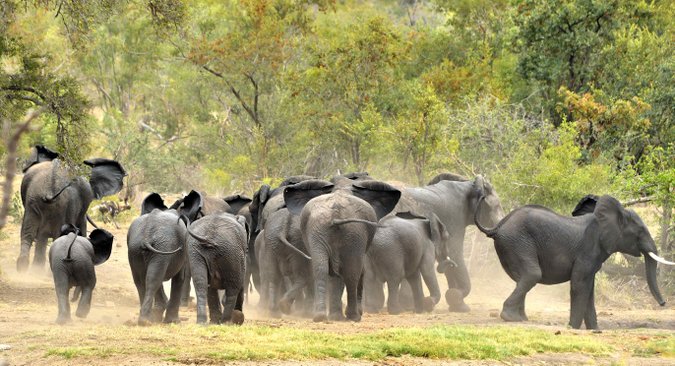 The elephant herd unhappy with the wild dogs © Rob Keulemans

Around midday a herd of elephants came down to the waterhole for a drink and a bath in the dam. After drinking the elephants slowly walked in the direction of the trees where the dogs were resting.

It took some time before they noticed the dogs, but when they did all hell broke loose! With a lot trumpeting and ear flapping the elephants then stormed in the direction of the dogs. The dogs scattered all over the place,  followed closely by the elephants. 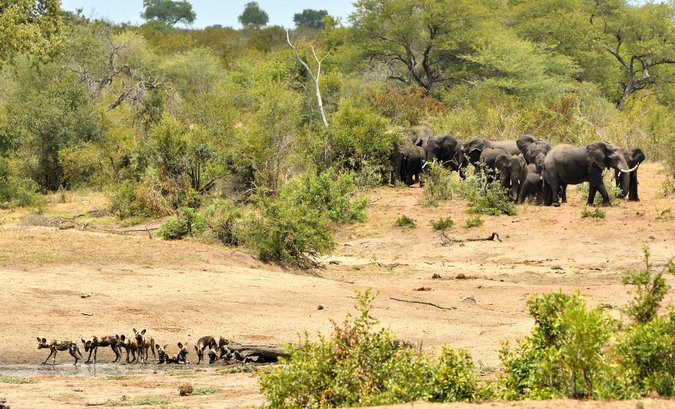 We thought that after this run-in with the elephants the dogs would definitely disappear into the bush. Much to our surprise some 10 minutes later, after the elephants had calmed down and were starting to move off, the dogs returned to their original spot – resting in the mud and relaxing in the same spot under the trees as if nothing had happened!

This was certainly a day with wild dogs that we will never forget! 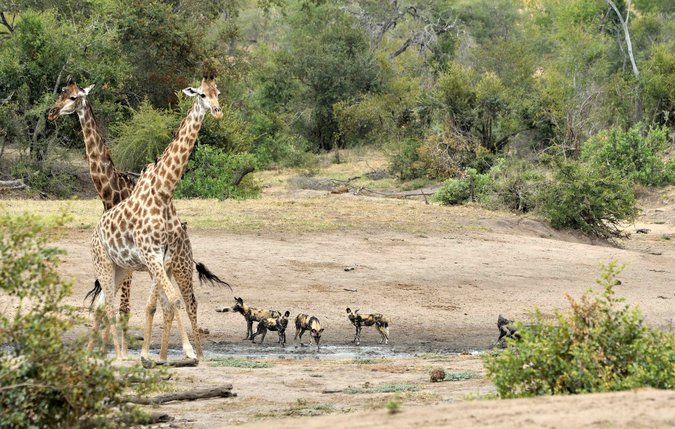