Should businesses pay to use animals in their logos and marketing efforts?

Many charismatic species such as elephants, lions, tigers and pandas face the threat of extinction, despite being held up as the poster characters for conservation. The logic of using these species to raise funds and awareness is that they illicit a stronger emotional connection and reaction from potential donors, than do say sparrows, plants and beetles.

Proponents claim that many less charismatic species will benefit by association because they live in the same ecosystems. And yet, the charismatic species are not faring well, with many facing steep population declines. Is it time to change strategy?

A recent report suggests that companies and businesses that use the likeness of these and other species in their logos and marketing efforts should pay a license fee towards conservation efforts. Whilst the legal implications of this suggestion are probably extremely complex, the concept has validity and requires further thought and investigation. 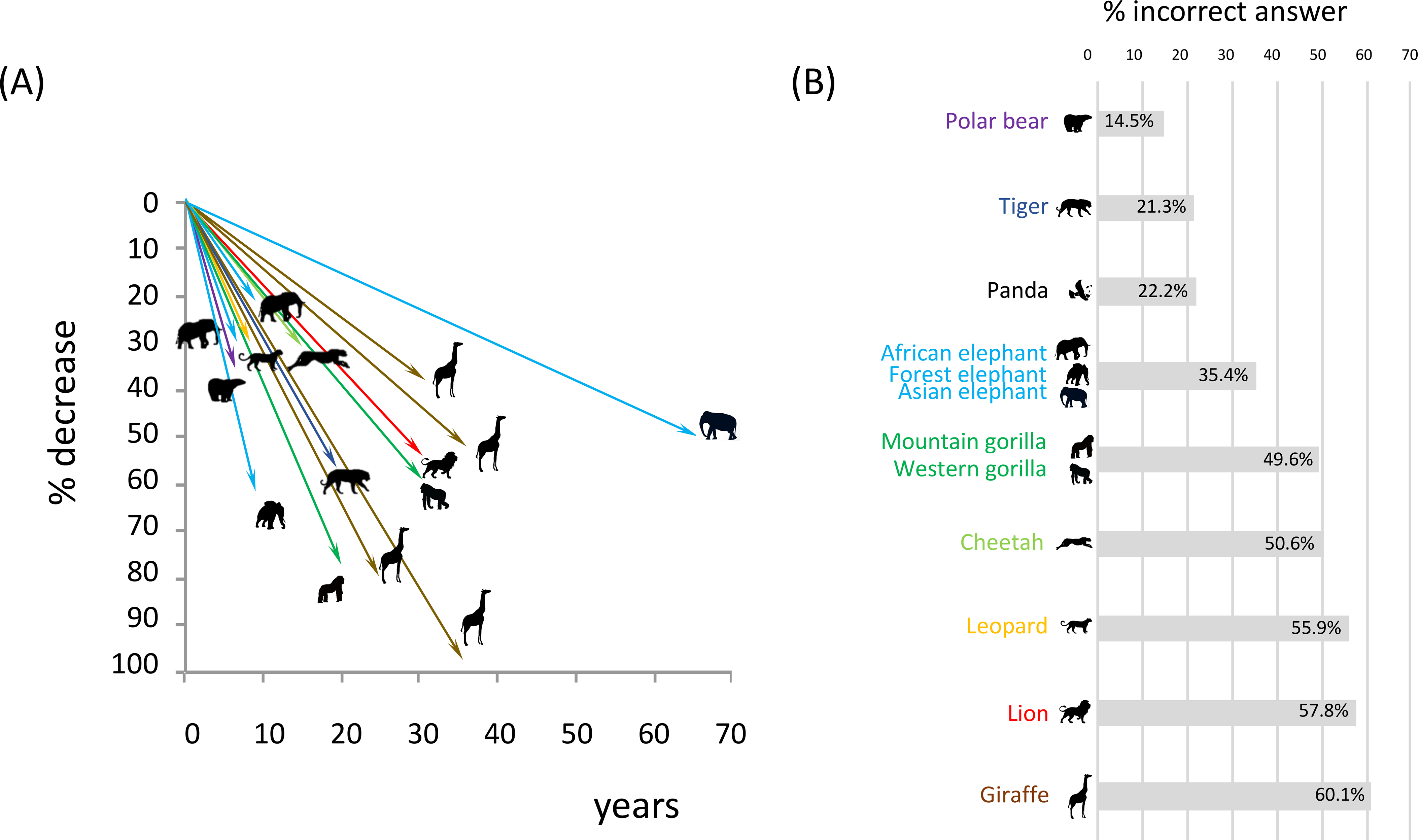 Recent, dramatic declines of the most charismatic animals. Time, but not date, is taken into account, explaining why all trajectories have the same origin. Long, steep lines indicate a large decline at a high rate © Courchamp F., et al

The report suggests that the public is largely ignorant that these charismatic animal species face extinction, possibly because people think these animals are widespread in real life, as they appear so often in business marketing collateral and in online content. And so, there is a lack of strong mainstream public support and monetisation. This ignorance of the true state of affairs is arguably nurtured by the wide scale and free use of the images of rare and threatened species in commercial product marketing – with no associated educational campaigns.

The researchers used four different methods to establish the ranking of the 10 most charismatic species in the eyes of the public, and reviewed their conservation status and level of public knowledge. The results suggest that the conservation status of the 10 most charismatic species is grave, while the public is largely ignorant of the conservation status. This “beloved but ignored” paradox probably stems from a mismatch between the virtual presence and natural presence of these particular species – in other words public perception reflects virtual rather than real populations.

The report argues that the representations of charismatic species in commercial, artistic, and cultural outlets act as virtual, abundant populations competing against real threatened populations for public attention.

The jeopardised future of the 10 most charismatic species:

• Lion: declining almost everywhere in Africa, with populations estimated to be at less than 8% of historic levels. In Eurasia, with the exception of the only remaining population of about 175 individuals of P. leo persica in India, all lions are now extinct.

• Elephant: the African savannah elephant never recovered from the 20th century massive poaching levels and are believed to remain at less than 10% of their historic numbers; the African forest elephant declined in a mere 9 years (2002–2011) by 62%, with about 30% corresponding range contraction; the Asian elephant lost 85% of historic range, and almost half of the remaining 15% is both fragmented and heavily impacted by an ever-increasing human population.

• Giraffe: previously classified as Vulnerable because it was assessed as a single species. Three of the four newly identified species have declined by 52%–97% in the last 35 years and are likely to be uplisted by IUCN. 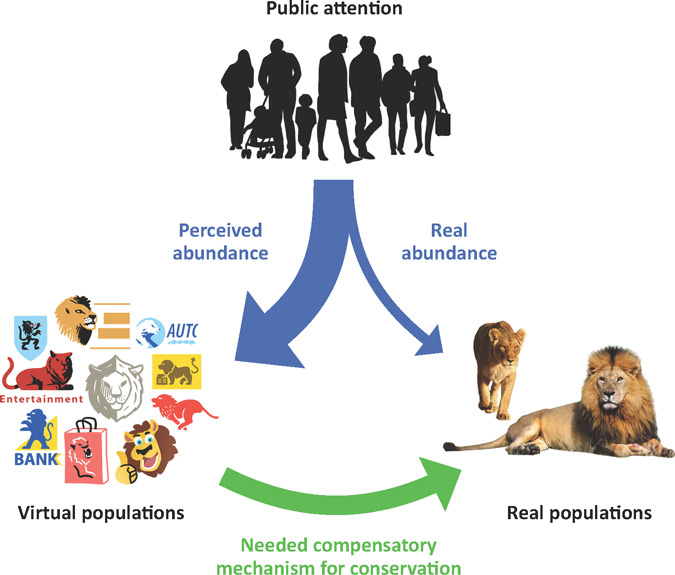 Illustration of the competition hypothesis between virtual populations (here represented by iconic logos of commercial companies) and natural populations (here represented by clip art of real animals), whereby abundance of virtual animals in culture alters the perception of actual rarity in real animals and, therefore, the perceived need for their conservation © Courchamp F., et al

• Panda: with fewer than 2,000 remaining individuals, distributed within 33 subpopulations and scattered on less than 1% of its historic range, its future remains particularly uncertain, especially in light of climate change, predicted to reduce most of its bamboo habitat.

• Cheetah: occupies only 9% of its historic range in Africa, being extirpated from 29 countries on the continent, while the Asiatic subspecies Acinonyx jubatus venaticus, numbering fewer than 100 individuals, is listed as Critically Endangered.

• Polar bear: lack of population abundance and trend estimates; 9 out of the 19 known populations are of unknown status. It is considered severely impacted by climate change and related sea ice decline. The few populations with available data show drastic population declines.

• Wolf: once the world’s most widely distributed large predator, it has now lost about one third of its original range, becoming extinct in much of Western Europe and the United States and being endangered in several other regions.

• Gorilla: of the 4 gorilla subspecies, 2 are limited to a few hundred individuals in small and highly fragmented populations, while the 2 others have lost most of their numbers in about 20 years

The report concludes by suggesting that a concrete mechanism should be established to ensure financial support from companies that use charismatic, endangered species for their branding. Resultant funds should be directed at innovative interdisciplinary conservation strategies and projects.