The feminist DJs in Uganda taking back the night

Kampala, Uganda — At a party in a private home in central Kampala, there was a moment early in the evening when the rose-lit room felt like a feminist utopia — a rarity in Uganda.
Women drank hibiscus cocktails and danced happily with each other as a female DJ played a set.
“We’re telling women that this space is for you, kind of turning the idea of ladies night on its head,” Kampire Bahana (DJ Kampire), known for her all-African, bass heavy music, told CNN.

DJ Kampire playing a set at Pussy Party, an event for women she helps organize.
She’s among a handful of female DJs working to create safe spaces for women and the LGBTQ+ community in Uganda, where violence against women continues to be rife. Half of women have experienced physical violence in the country, while 22% have experienced sexual violence, according to a 2018 report from the Uganda Bureau of Statistics.
Kampire, who organized the evening with other women, including Rachael Kungu (DJ Rachael), says their aim is to eliminate sexual harassment and demand accountability.
The country has a conservative outlook — influenced by a mix of colonial-era laws, evangelical Christianity and traditional beliefs. In 2014, two controversial laws made international headlines. The Anti-Homosexuality Act created a surge in hate crime against LGBTQ+ people, and the Anti-Pornography Act, which included a “mini-skirt ban,” led to police and vigilantes stripping women in the streets.
Activists say that these laws have created a fertile environment for crimes against women to be committed. Since 2017, the bodies of more than 20 women have been found dumped on roadsides in greater Kampala.
The government and police have been accused of being slow to respond to the spate of murders — leading to a series of protests in June, including a women’s march and procession carrying mock coffins to the country’s parliament building.
In response to the murders, President Yoweri Museveni, Uganda’s leader of more than 30 years, spoke out against gender-based violence and announced measures to deter attacks against women, including nationwide DNA collection.

A pink-tinted Kampire DJing at Pussy Party.
But local activists have accused Museveni of blaming female victims of night-time violence. Speaking about the murder of one woman in February, Museveni suggested that young people should avoid alcohol and drugs: “I will not allow anybody to interfere with the freedom of our young people: discos etc. … but avoid alcohol, drugs and umalaya [sex work]. They are dangerous for you.“
Industry veteran DJ Rachael disagrees.
Dubbed East Africa’s first female DJ, Rachael has been filling dancefloors with big sounds for over 20 years.
“It’s degrading for the government to blame women for being out at night,” she told CNN, peering out beneath her signature baseball cap. 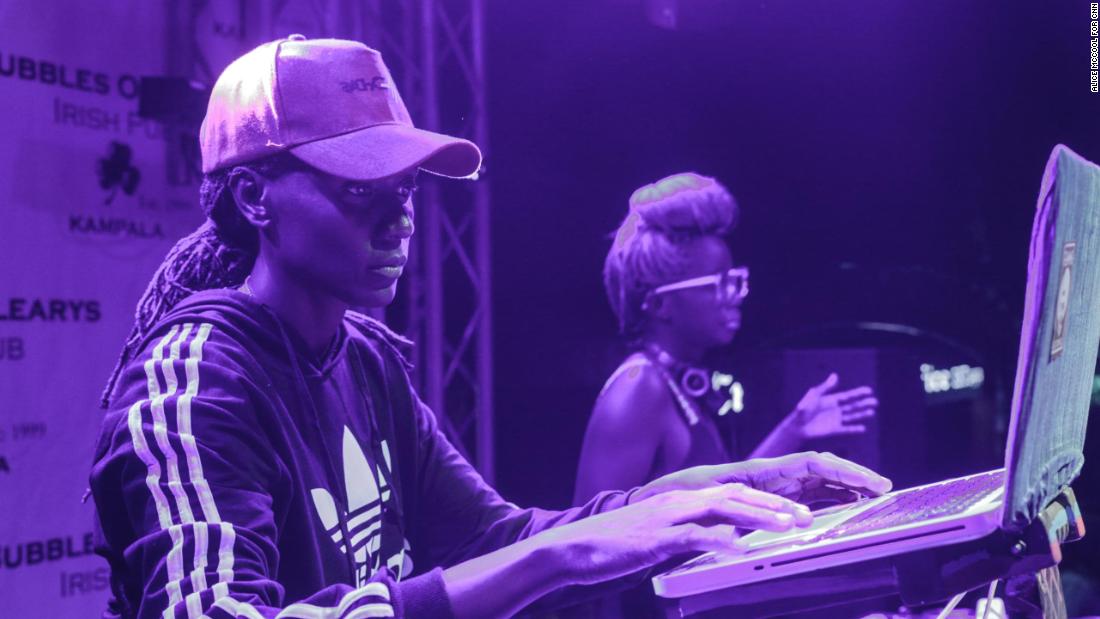 DJs Rachael (left) and Kampire (right) playing at Femme Famous, an event organized by Rachael featuring female DJs who she’s mentored.
“Some women are out having fun, others are working — DJs like me, musicians, hotel workers — we all have to go home late in the night.”
Rachael mentors young women interested in mixing, and says she wants to share her expertise with more underprivileged women too: “There are some women in a camp nearby from war-torn areas in Northern Uganda who I want to encourage to take this up.”
Kampire was also partly taught by DJ Rachael as part of her Femme Electronic DJ collective.
“It’s good to have somebody who has already broken those barriers, it makes entry for other people easier,” Kampire said.
“I want to see more women everywhere … making money, being business owners, running things,” she added. 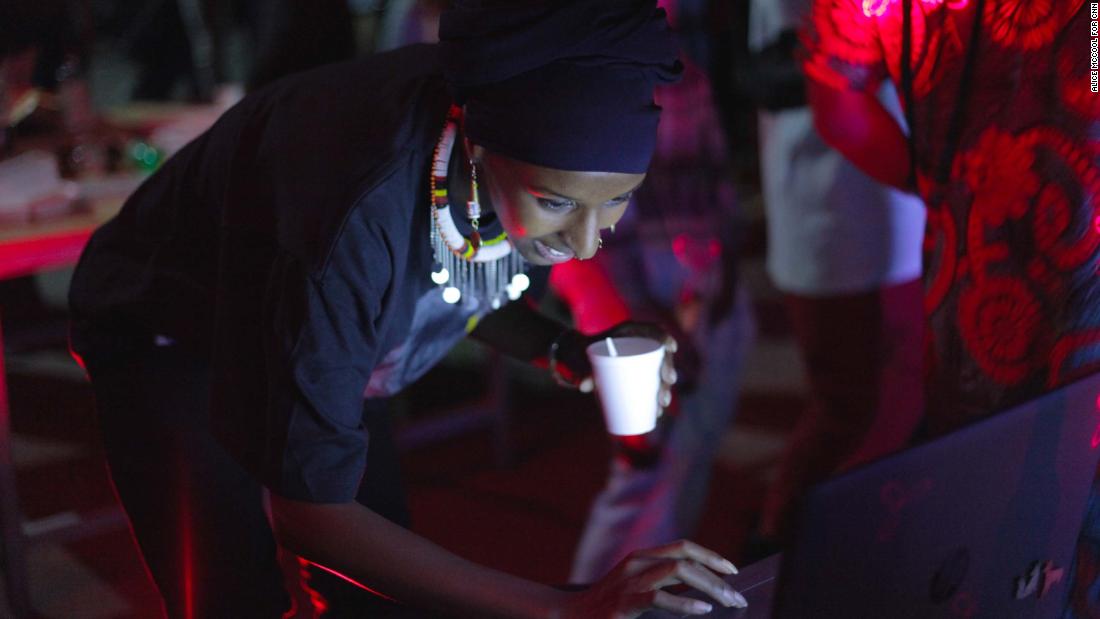 DJ Hibotep playing at Design Hub Kampala, an event and co-working space in an industrial area of the city.
Somalia-born Hibo Elmi, who plays under the moniker Hibotep, a regular behind Kampala’s DJ booths, is working toward the same goal.
After being told by a producer that she had to sleep with men or be rich to get studio time, she set her sights on a recording studio of her own: run for women, by women.
Hibotep says she’s hyper aware of how surprising she is to people as a female Muslim DJ. On stage, her face is punctuated by bright lipstick and a nose ring, framed by a headscarf. As she plays, videos shown alongside her sets depict “Ninjabis”: stereotype-smashing women in burqas, smoking and swearing.
The DJ says she long stopped trying to pander to audiences — especially men — instead claiming nightlife spaces around her as her own.
“When you’re a woman you get targeted easily,” she said, adding that male DJ colleagues have even attempted to sabotage her sets by stepping on wires or pretending to misplace equipment needed for her to play. But she continues to play shows, and to push the boundaries of the male-dominated music scene. 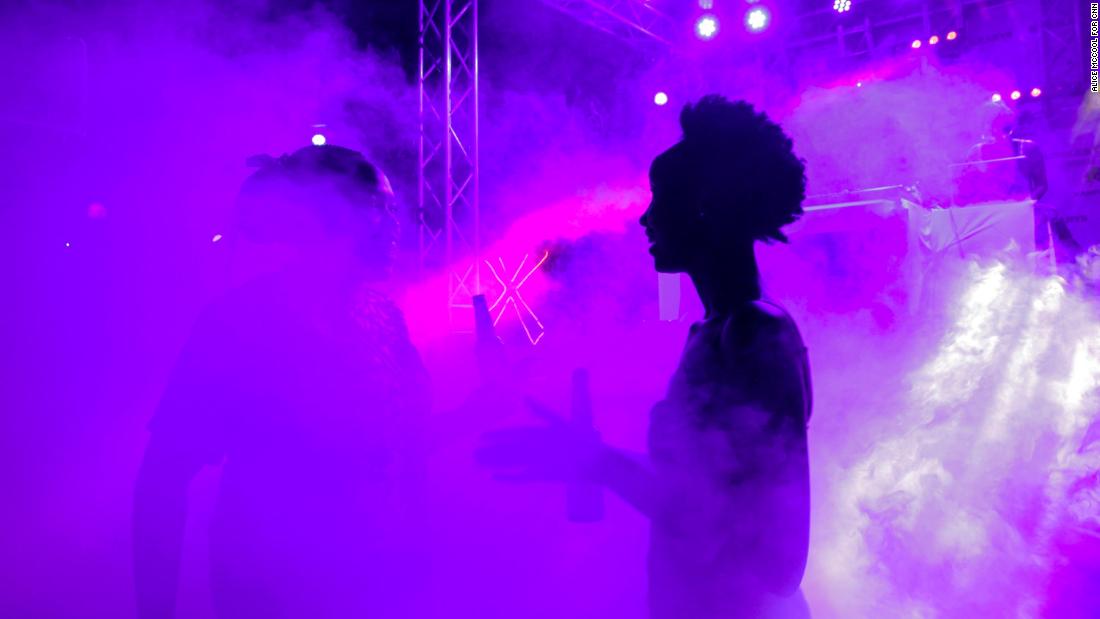 The crowd at the Femme Famous event in Bubble O-Leary’s Pub.
“All us female DJs here play something different,” she said. “It’s to make a statement. This is our movement and this is how we’re gonna shout.”
And those “shouts” are beginning to be heard beyond Uganda’s borders.
This summer, Kampire has taken her distinct sound global with her first European tour.
Back in Uganda, she is trying to change that landscape, but it’s still an uphill battle.
Even after organizing “Pussy Party” Kampala — a club night with DJ Rachael, curating an all-women and non-binary DJ lineup and security team, and employing a strict door policy — Kampire’s vision for a safe nightlife space isn’t quite there yet.
The same evening that started so well — with pink cocktails and women on the decks — ended up unraveling. The organizers lost control of the door policy, and complaints of threatening and abusive behavior from men flooded in.
“It’s so challenging trying to create a space which is safe for women and gender minorities, and dealing with straight men’s entitlement to women’s spaces,” Kampire said later in messages on WhatsApp.
“We are still working through the practical aspects of that. But it’s a privilege to learn and figure it out, so we’re looking forward to the next one.”

The As Equals reporting project is funded by the European Journalism Centre via its Innovation in Development Reporting Grant Programme.